THE ART OF LIVING

THE ART OF LIVING OF THE HUMBLE COTTAGE DWELLER!

With its panoramic terrace overlooking the sea, its trellis, reed screening, bar and terraced garden, the Etoile de Mer is a perfect example of the art of living of the humble cottage dweller on the Mediterranean. 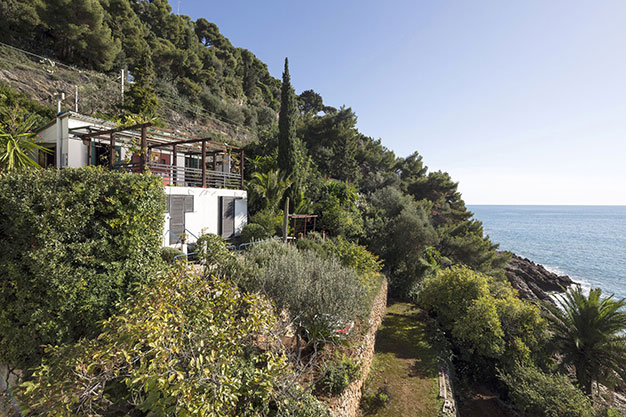 It was initially to build a hut in which to store his fishing tackle and picnic equipment for his family that Thomas Rebutato, a plumber from Nice, bought a plot of land on the terraced hillside next to Villa E-1027, below the customs officers’ footpath along the railway line. In 1949, he gave up his plumbing business and converted the hut into a snack bar. Le Corbusier, who was one of his first customers, quickly became a regular visitor to the establishment where he painted several murals that were much appreciated by the owner. They decorate the façade and the bedroom.

The original design of the Etoile de Mer is testimony of what a minimalist dwelling by the sea could be.

A prototype of the minimalist dwelling, built by Thomas Rebutato on the basis of plans by F. Pietra, of Nice, the original Etoile de Mer comprises a main room with kitchenette, WC and a bedroom. On the sea side, the French windows open out on to a terrace 1.50 metres deep on which the bedroom window also looks out. Between the rear wall and the railway embankment, access is by a wooden door and a passageway. On the lower terrace, a wooden hut houses a shower.

This lightweight prefabricated construction with a frame consisting of wooden beams rests on concrete supporting blocks. The walls are made of fibre cement panels and the sloping corrugated fibre-cement roof rests on wooden joists. The ceilings are made of hardboard sheets and the flooring is wooden parquet.

When he built his cabin, Thomas Rebutato originally intended to build another five nearby which he would have sold after setting up a small estate on his land.

Over the years, Thomas Rebutato steadily improved his establishment in order better to satisfy his customers who were attracted by the panoramic view from the terrace of the Etoile de Mer.

Thomas Rebutato thus enlarged and embellished his restaurant, installing a kitchen at the rear and cementing the staircase in order to create a new entrance at its foot. Once the main room had been converted into a bar, he decorated the counter and the walls with his paintings.

Outside, all of the spaces go to make a real garden, in which Thomas’s taste for art brut expressed itself in borders formed of broken bottles, low walls and plant containers made of brick fragments and pebbles picked up on the beach. The terrace and arbour have now become a large summer dining area.

Yvonne, Le Corbusier’s wife, was married to one of the world’s most famous architects. And she had a most unusual safe!