A native of the Swiss Jura, Le Corbusier loved the Mediterranean, the light, the landscapes where great civilizations had emerged, and the rural architecture. The Cabanon bears witness to these ancient roots, and the architect, who was to die in the waves off Cabbé beach on 27 August 1965, now lies at rest in Roquebrune cemetery. 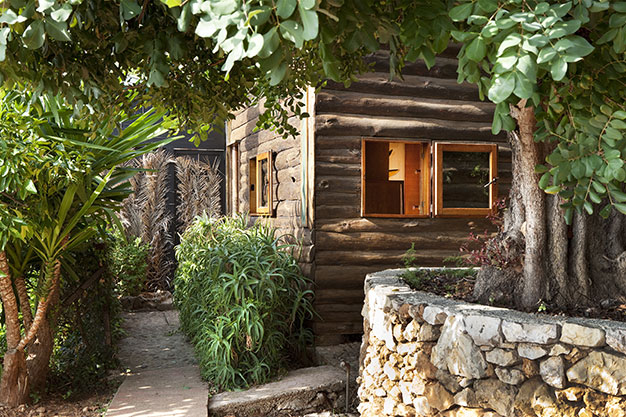 That is how Le Corbusier described the wooden cabin (Le Cabanon) he built in 1952 on a plot of land adjacent to the Etoile de Mer restaurant that had been built in 1949 next to the Villa. Though of only modest size, it is the illustration of a series of research projects on the rules of harmonious dimensions defined in the ‘Modulor’. Till his wife Yvonne died in 1957, the architect spent his summers there with her and continued to use it as a holiday home until his own  death in 1965.

FROM THE MYTH OF THE CABANON TO FUNCTIONALISM

In 1928, the cover of a book by Le Corbusier, ‘A house, a palace’, showed a fishing boat which testified to his admiration for the vernacular. This may explain the rustic appearance of the external walls of the Cabanon, a far cry from Le Corbusier’s famous white villas.

The originality of the Cabanon resides in the fact that it associates the spirit of the trappers’ cabins and the functionalism vaunted by the architects of the modernist movement. For the latter, defining a typology of living cell, reduced to a minimum space fulfilling several functions at once, is crucial. Beneath the single-slope roof of the Cabanon, a working area, a resting area, lavatory, wash-basin, a table, storage cupboards and a coat-rack are concentrated into a square cell measuring 3.66m by 3.66m and 2.26m high. The structure of all these wooden elements, prefabricated in Corsica by the joinery firm Barberis, was assembled on the spot like a Meccano kit.

THE HARMONY OF THE INTERIOR

Inside the Cabanon the furniture, made of oak and chestnut, and the plywood partitions compete with one another as clever ways of dividing up the available space and facilitating storage.

Fixed to the wall of the façade looking out on to the sea, a work table with a chestnut marquetry top is supplemented by a low cupboard with storage compartments. Separated from the lavatory by a red curtain, the bed incorporates a  wooden head-rest with storage . The murals that decorate the entrance and the two folding shutters, the yellow  parquet floor, the green, red and white panels in the ceiling and the splashes of colour from the coat pegs contribute to the harmony of this joyous sobriety. 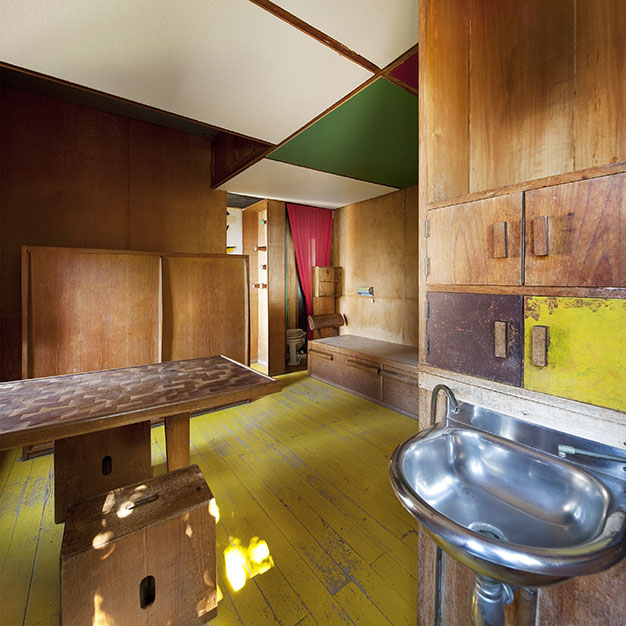 Le Corbusier loved the Mediterranean, which was a constant source of inspiration for his work. One of the two small square windows in the Cabanon frames the view of the sea. The other, close to the wash-basin, is turned towards a venerable carob tree.

It was the presence of this carob tree, now inseparable from and virtually an integral part of the Cabanon, that dictated the choice of the site for the Cabanon which it protects with its shade. As living in osmosis with nature was his aim, Le Corbusier would shower outdoors in an improvised “bathroom” under the carob’s foliage.  Close by, a concrete table and a seat served as a place for contemplation and reflection. When he wanted to work, he needed to walk just a few steps to the builders’ hut that served as his workshop and where he stored his drawings.

A MANIFESTO OF MODERN ARCHITECTURE

The Cabanon is now recognized as a manifesto of modern architecture, and two replicas have been made by the furniture designer Cassina. They are frequently exhibited all over the world.

The fragility of the Cabanon and the workshop hut raises problems for visits by the public. No-one is allowed to enter the hut and restoration work will begin on both buildings in the near future. As for the Cabanon, groups of no more than four persons, accompanied by the guide, are allowed to enter , and for a visit of no longer than 2 to 3 minutes so as to allow a smooth rotation of visitors.

It is vital that neither the paintings nor the furniture should be touched; nor may the handles or openings be manipulated by anyone but the guide.